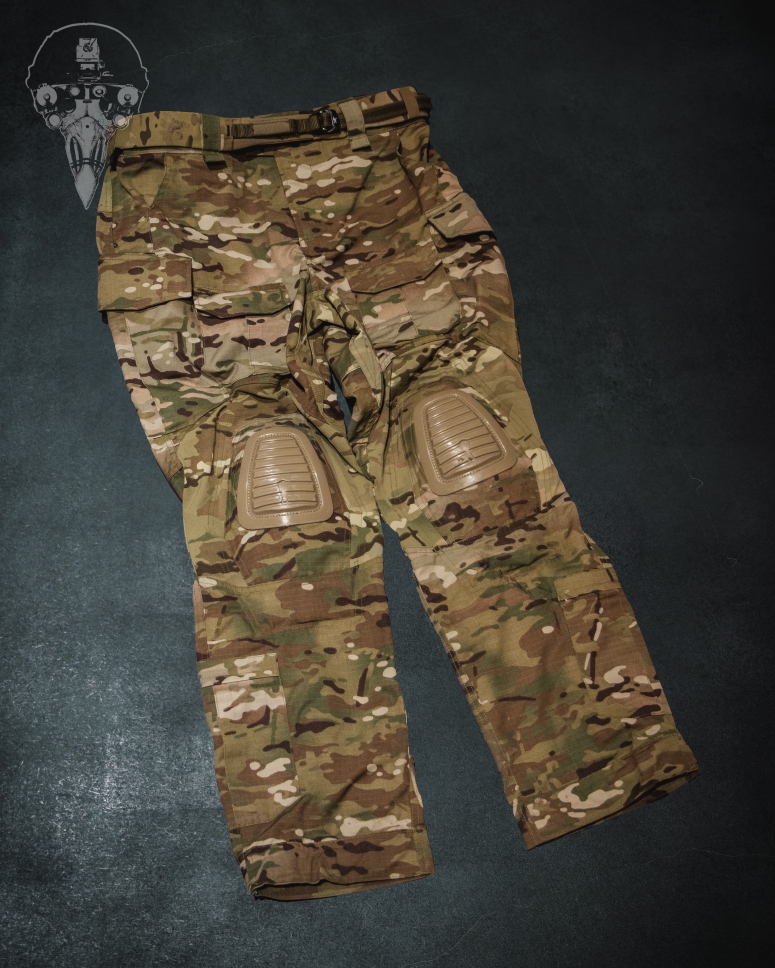 If you think of the term “combat pants”, you might automatically picture a pair of trousers made by Crye Precision. This isn’t without good reason, since the early 2000’s Crye have led the market for over-engineered uniforms. With this success comes the Apple effect, where charging extortionate amounts of money for your label becomes acceptable “because it’s the best”, and people happily fork out hundreds of pounds to wear the height of tactical fashion.

Until recently, companies offering a comparable product have often flown under the radar, overshadowed by the “cool guy” status Crye has accrued by outfitting special forces the world over. Patagonia and Arc’teryx are two of the emerging giants, but one company in particular has been quietly working away, out of the view of the masses: Platatac.

You might have noticed that I talk a lot about Platatac stuff. I’m not employed by them, and while we have a good relationship which has included items for T&E, I have thrown a considerable amount of my own money at them over the years, and am always happy to point out if there’s a problem.

Platatac have been running their Tac Dax line of apparel for many years now, with the Mk.I’s first appearing in 2008/09 made in the proprietary Platacam. Since then they’ve gone through the Mk.II (my write up on these can be read here), Mk.III and now to the Mk.III improved in 2019. Designed for Australian and Kiwi SF, Tac Dax pants have the distinct look of the famous Crye trousers, but with the small tweaks and changes that make them unique, and arguably better. The Mk.III Improved (Mk.III-i for the remainder) are a real callback to the Mk.II’s, returning to the use of Crye compatible kneepad pockets but retaining most of the upgrades found in the Mk.III’s.

As previously mentioned, if you’ve owned just about any pair of modern combat pants, you know the broadstrokes of the Mk.III-i’s: stretch panels in all the right places, slash, cargo, thigh and calf pockets where you would expect them, and velcro adjusters to perfect the fit. The differences come in the details.

From the top, one thing I have always valued in Platatac Tac Dax trousers is the padded waist. It’s not just a double layer of fabric, it’s actual noticeable padding. This really helps with wearing loaded belts for long periods of time. You can cinch your belt right down with a holster and pouches attached, and not end up with any hotspots. The waistband also has the now industry standard velcro adjustment. 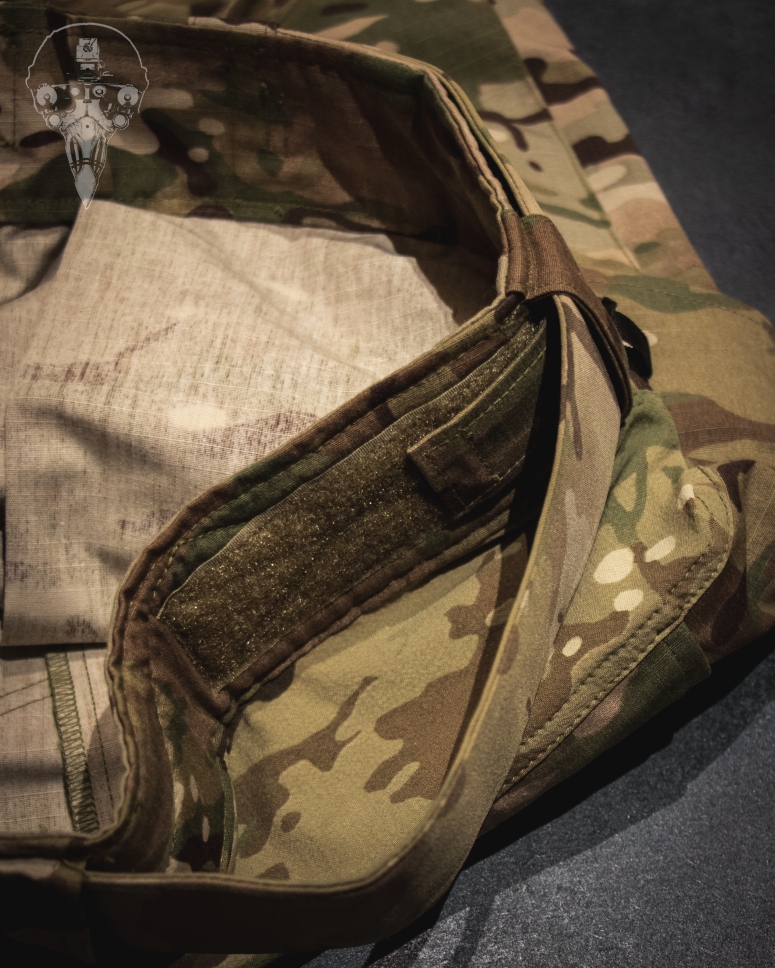 Continuing downwards, the next major feature unique to the Tac Dax pants are the concealed sleeves behind both the cargo and thigh pockets. The hidden compartment behind the cargo pockets is designed to take a 5.56mm magazine, but can also take a small water bottle or radio, making up for the lack of elastic inside the main pocket itself. I’ve found this pocket to be just deep enough to be secure while still letting the magazine out easily, especially when ranger plates are used. The smaller sleeves behind the thigh pockets unfortunately don’t take magazines, but could be useful for carrying items such as flashbangs or tourniques that require quick access but aren’t going to have a permanent home in your kit. 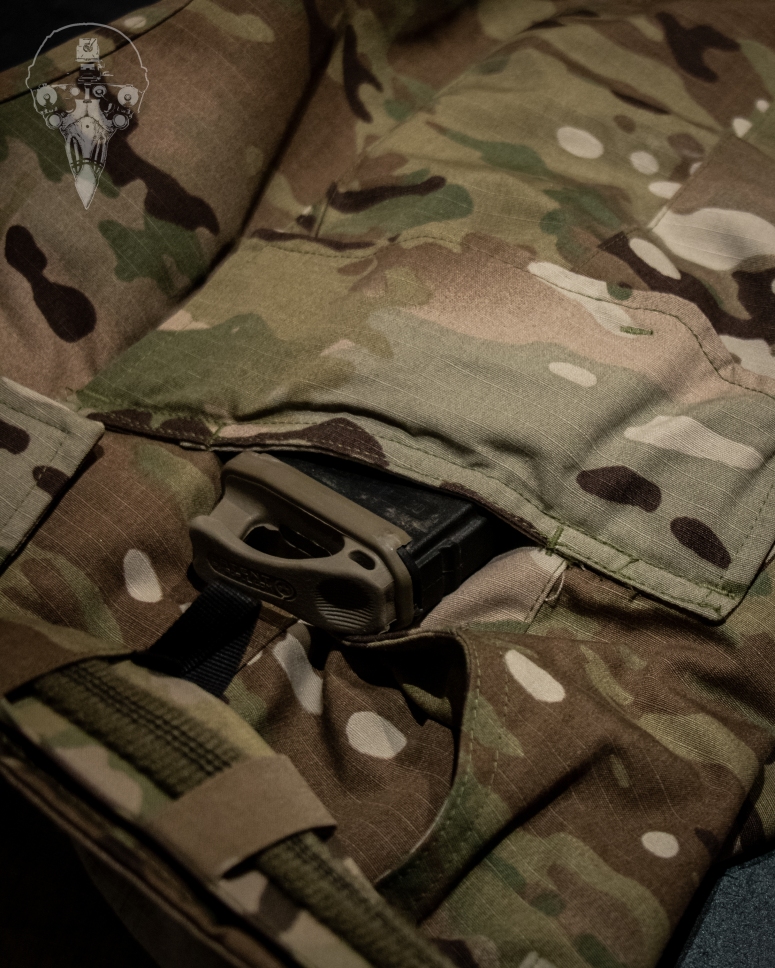 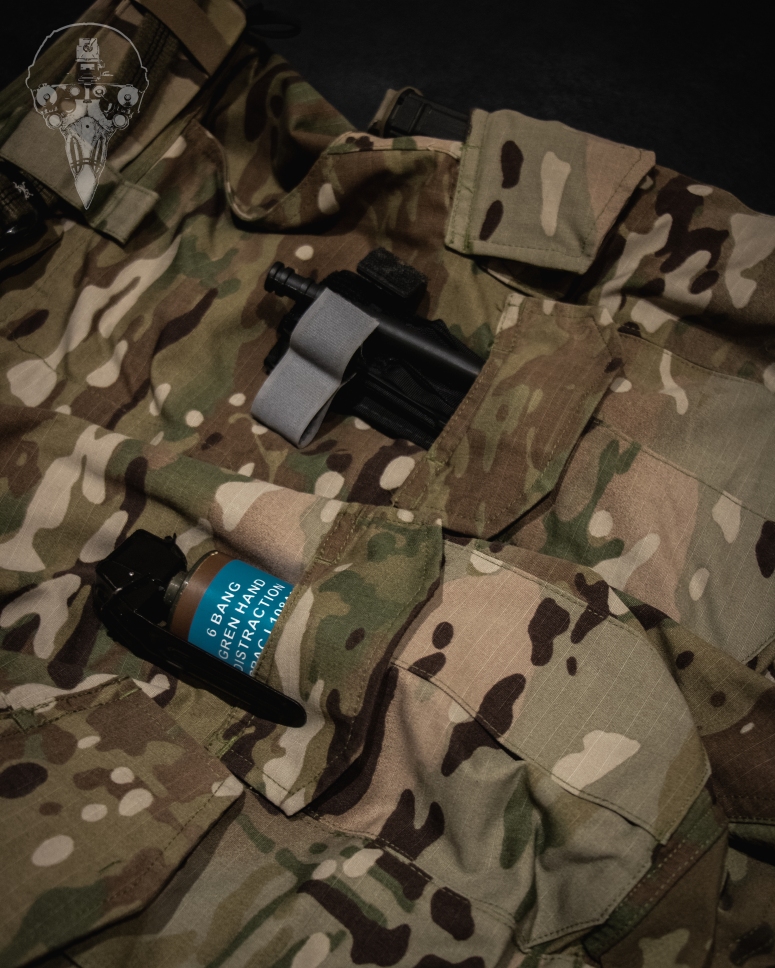 The big change between the MkIII and Mk.III-i’s are the kneepads. I don’t think anyone will disagree with me when I say D3O kneepads aren’t great. I’ve never owned a pair, due to the fact that everyone I know who has owned some has also lost them. Returning to the ubiquitous Crye pattern pads makes the knee protection simpler and more secure. Platatac’s added feature around the knees are the dual velcro adjustment tabs on the back of the legs. They are by no means the first to come up with this, but it’s a simple feature that everyone should be including, as it means the user can precisely set the kneepad to where they need it. The next major improvement is in the closure system of two sets of the pockets. As someone who spent a little bit of time in the British Army, I’ve done a fair few kit checks, and on these kit checks there is always one item that everyone says is pointless, but has used more than they would like to admit. The “Housewife”, otherwise known as a sewing kit. We Brits like buttons on our uniforms as they can be replaced using the infamous housewife while in the field, and this influence is clear in the Mk.III-i’s as the cargo pockets feature both velcro closure and some fucking sturdy buttons. While they may not be fast or pretty, this little addition is just one of the things that will help these trousers outlive their American counterparts in terms of durability. The calf pockets also contain a nod to a longer lifespan, with the velcro closure replaced with a zip. 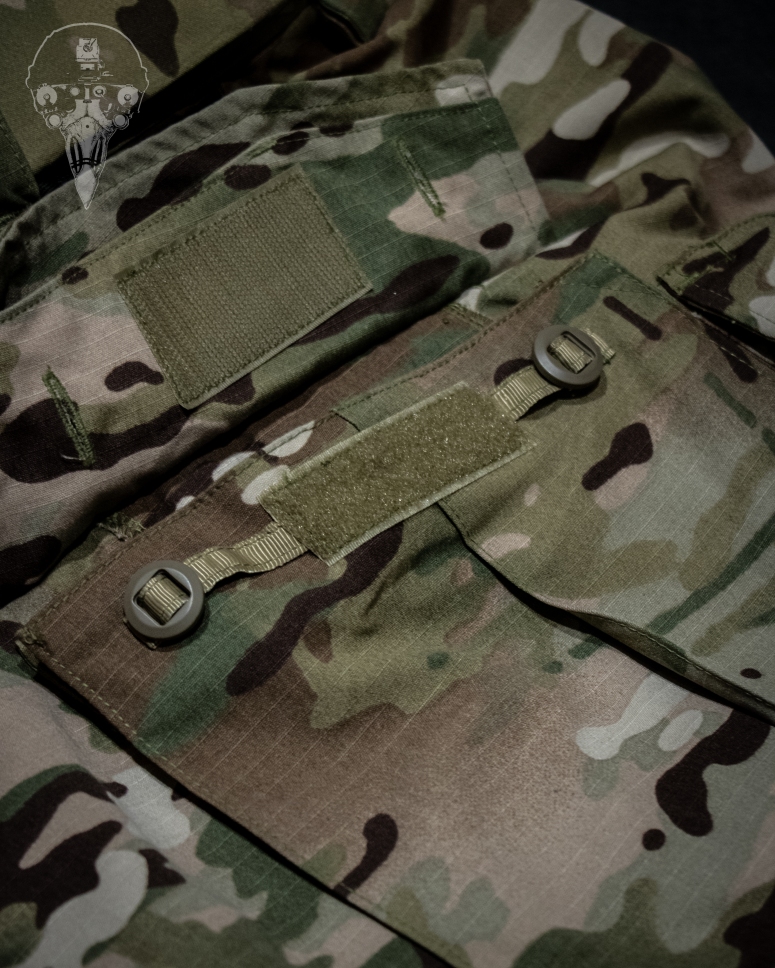 You might be thinking “surely a zip is harder to repair”, and you’d be right, but Platatac have taken this risk to avoid the inevitable fouling of hook velcro when used in that area, that will eventually become so full of grass and other shit that the pocket closure becomes unreliable. To mitigate the risk of damaging the zip as much as possible, it is hidden away under two fabric flaps that cover it in its entirety.

Finally, the ankles of the Mk.III-i’s have the expected velcro adjustment, but with a twist. The adjusters are attached to the ends of shock cords hidden in the hem. This means that when you tighten the ankles, you aren’t simply changing the diameter of the opening to try and get a tight fit (that often rides up), you are actively sealing the trousers around your legs or boots. This constant pressure provided by the elastic helps to keep bugs and dirt out when fastened, but when worn loose goes unnoticed. 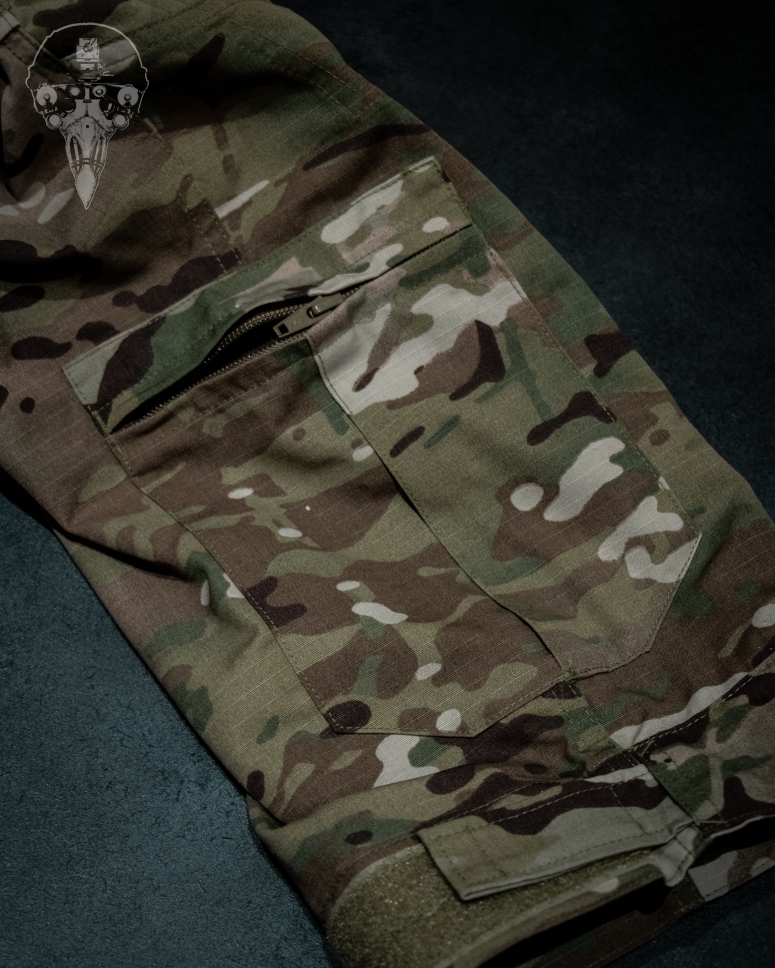 Despite all of the above, I do still have problems with the Mk.III-i’s. For starters, while it’s nice to have free kneepads included when buying the trousers (another area where Crye is following the Apple business model), but they aren’t the greatest. They look the dog’s bollocks, but I just don’t find them comfortable. There is very little by way of padding and the outer shell is rigid plastic, meaning that when you take a knee you are trading an uneven hard surface for the even hard surface of the pad. Evening out the hard surface is technically an improvement, but it’s not mind blowing. That being said, they were free, so I can’t really complain too much.

Secondly the cut of the Mk.III-i seems to have changed from the Mk.III, opting for a higher waist and deeper groin. This means that for short-arses like me you have to choose between having your belt where you want it and ripping your crotch while taking a knee. The workaround for this is to put your belt where you want it, and then hope that your holster leg strap holds the groin where you need it, but it’s not ideal, and is especially annoying as the fit of the Mk.III was dead-on perfect. I managed to find two flaws in the Mk.III-improved design, but they are hugely outweighed by the many unique features that Platatac has included. One thing I haven’t mentioned is price, because it often makes people think “if it’s cheap it’s shit”. They couldn’t be more wrong when it comes to Platatac. Their products are mostly contract overruns, meaning they aren’t having to pay for themselves solely through retail value. This makes the latest Tac Dax pants incredibly affordable, at 250 AUD (approximately £135), with included pads compared to the Crye UK retail price of £250+ without.

A comparison I once used was saying that the Mayflower APC was the Android, where the Crye JPC was the iPhone. I’m going to use it again, as with Android compared to Apple, with the Platatac Tac Dax Mk.III-improved, you pay less and you get more.

Thanks for reading my review of the Platatac Tac Dax Mk3 2019, and thanks to Platatac for generally being cool dudes. If you have any questions regarding this review head over and ask them on my Instagram @thegeardocrow.

My portfolio of my journey into being a Content Producer.

The Candid Confessions of an Amateur Airsoft Gear Collector

Chatting shit about kit since 2017