When I was first approached about the Thyrm Vari-angle mount I wasn’t too sure what to make of it. Having a dedicated white light on my helmet has never been something I’ve needed as I’ve generally had night vision for the majority of the time, and now that I’m a full blown civilian I’m scared of the dark. So when Tactical Kit sent it over I had some reservations.

In terms of its function, the Thyrm Vari-Angle is perfect. Sliding it onto the arc rails of my Opscore it gave a satisfying click into each position, and won’t be easily budged. At first I tested it using my X300 which didn’t prove to be entirely successful, as my cheap clone torch didn’t have a very secure fit and stuck out quite far from the helmet. I had a look around, and more specifically at the Thyrm promotional video for the Vari-Angle, and saw that they were using it with a Surefire M300C, which I decided to copy. 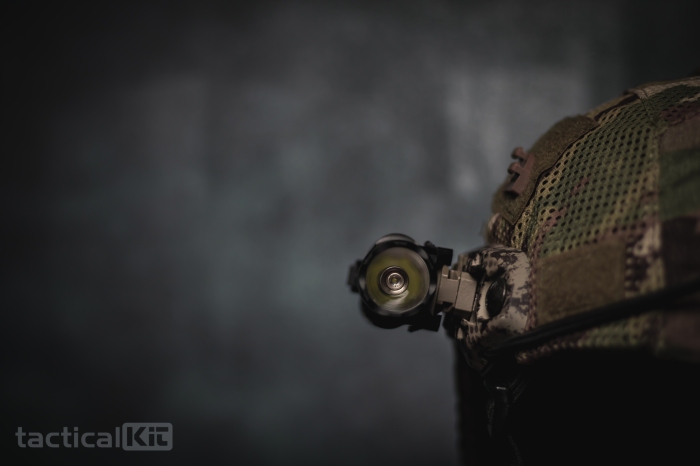 As soon as the new torch was on, I immediately felt happier with the system. The ability to run a full power torch comfortably on your helmet is normally only achieved with systems like the S&S Max mount, which are prohibitively expensive and hard to find. Running the Vari-Angle in conjunction with an offset rail mount makes for an incredibly sturdy system that is surprisingly low-profile. It is made of a tough plastic that keeps weight down without sacrificing strength, and has a rail length of 3 standard picatinny slots.

The build quality is excellent, but what about its use? The intended user of this product is obviously Military and Police personnel looking to have a dedicated white light solution for use during SSE or arrests etc, that won’t break their department’s bank, or their necks when they have it on. The Vari-Angle fulfills this role perfectly. It may not have the prestige of other products that have been seen on the helmets of your favourite SF unit, but it works. Well.
The mount itself has a rotating rail section that positively locks into each position. This allows the user to adjust the projection of their torch beam by simply reaching up and clicking it into place. Using this feature feels reminiscent of simply clicking a head torch up and down, and is a natural movement when operating under white light.

I saw a different market for the Vari-angle however. Recently there has been an increase in the use of tactical style helmets in non-tactical situations by several accounts that I follow on social media, none more so than the UK’s own @valleydeepmountainhigh. Andrew is a member of a search and rescue team in Cheshire, and recently has been going on adventures into dark spaces while caving. These expeditions into the ground will definitely require a strong visible light, and I imagine the Thyrm mount combined with a powerful illuminator would be an ideal system for it.
So where did I land with the Thyrm Vari-Angle? Have no doubts, this is a solid piece of kit. If you’re looking for a practical system that is cool because it works, then look no further. It is suitable for its intended audience of high speed cool dudes both in camouflage and out, and is also perfect for a wide range of civilians who use the arc rail system on helmets outside of the tactical community. I’m still scratching my head over helmet mounted white lights, but this is something I’m eager to test more and build up a better opinion of my own uses for it as time goes on.
As ever, a massive thanks to the guys at Tactical Kit for giving this to me for review ahead of its launch. If you would like to get one of these for yourself then I’ll leave a link to it here. It’s also worth heading over to @atrg_ as his review of the Thyrm Dark Vault is now live!

Thanks for reading my review of the Thyrm Vari-Angle Helmet Mount, if you have any questions or feedback then please get in touch with me over on Instagram at @thegeardocrow.