Op ATAR is round the corner, so I thought I’d share a detailed rundown of the gear I’ll be using.

One thing all squaddies hate is kit checks. It’s part of the bullshit that led me to leave the Army. As a grown man it is quite frustrating to have someone the same age, or younger than you, checking to make sure you’ve packed enough underwear for your little camping trip, but it’s the nature of the beast and there’s always that one utter dossbag who doesn’t bring any warm kit to an exercise in Estonia, and then proceeds to take an NFCI and get home on the biff.
Well, this is one of those times where the phrase “civvies pay thousands for this” is absolutely true. Ladies and gentlemen, I just finished kit checking myself, and it is 100% more fun when done in your lounge than when done outside in the rain.
Op ATAR (hosted by Stirling Airsoft) is set to be a Combat Mission held at Cellini Villiage in Brecon, and so luckily doesn’t require the kit normally dictated by outdoor living, and only lasts for 24 hours meaning that sustainment gear can be minimal. The event organisers have also specified that due to the teams being accommodated in buildings that are in game, gear is to be kept to a minimum lest someone should detonate your wash kit with a GR20. Finally the game type dictates that gear be centred more towards FIBUA than FIWAF, and being light and fast is preferable to having enough gear for a 72hr OP. With all that out of the way, let’s get into it. 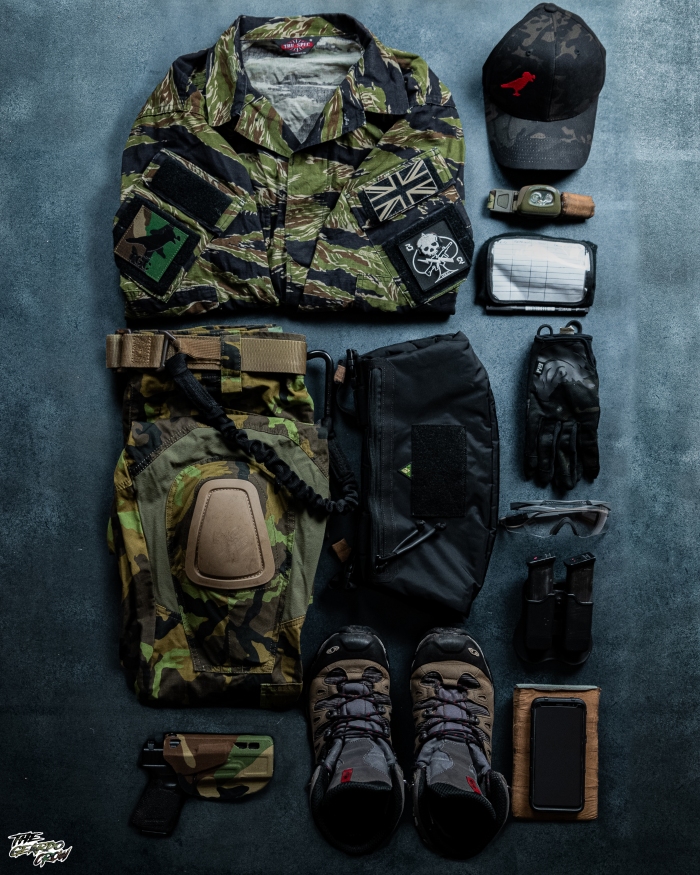 My on-the-man gear is basically made up of the items I would need to fight my way back from a portaloo, and to be comfortable while listening to safety briefs. In real life there would be a considerable amount more in this section, including notepad, med kit, MISTAT cards and my personal weapon, but thankfully this is airsoft and we don’t have to worry about these things.

The thinking with my chest rig has definitely been to scale back, with the option to add more gear if needs be. For instance, as a team we have just put in an order for 50 TAG AFG-6 grenades, and so room has been left on the forward MOLLE of the utility pouches ready to accept them. I’ve also decided to try only using a Baofeng instead of my full-sized PRC-152, as Cellini is such a small area that I don’t think I’ll have any issues, and the added weight savings may prove essential. The final interesting point is carrying my tracer unit around. Unfortunately, as a poor, I don’t have the luxury of NVG’s, and so for the first time I’m going to try using 1in4 tracer at night, and hope for a good moon state. The thinking is to have one magazine loaded with this mix, and so I can quickly switch back to regular ammo should it prove to be a bad idea. 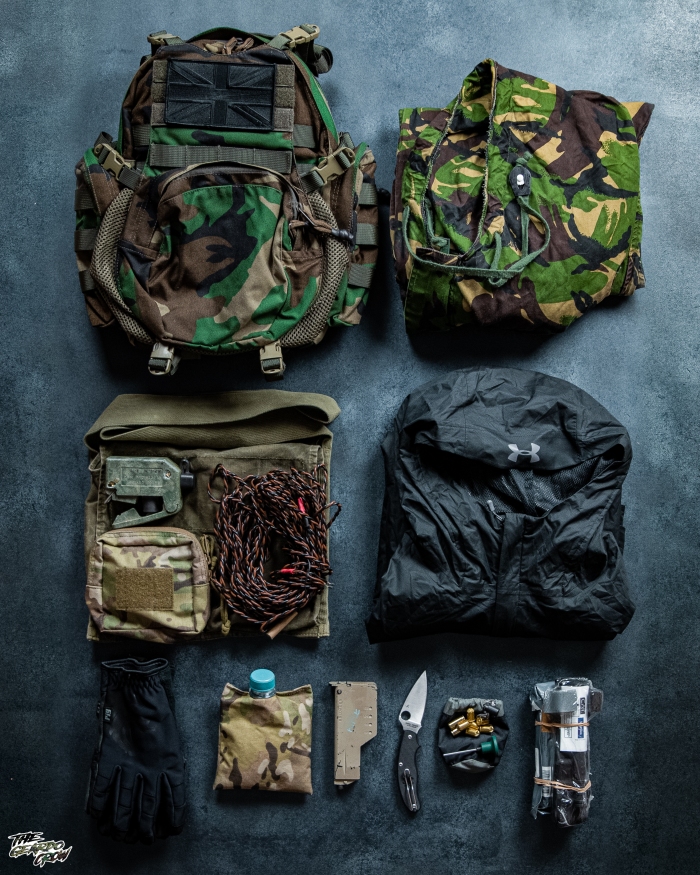 If you can’t already tell, there’s a theme going on here (I use a lot of Platatac M81 stuff). For Op ATAR I’m treating my daysack as a sustainment pack, as I doubt I’ll be running around with it on for the majority of the game. My thinking here is just to have my spare ammo, waterproofs and snacks in a handy bag that I can quickly grab should we decide to go and sit in a bush for 8 hours. The guys at Stirling have already assured us that no vehicles will be in use, but the dems kit is still coming just in case those pesky TF lot decide to try rolling a Snatch over us in the middle of the night and we need to assert our dominance. Finally something which I’m taking that has nothing to do with airsoft? The bleeder kit. I always try and keep this pair on me, and for the most part they live in my daily bag. Some people will undoubtedly say “what the fuck do you need them for?” well on the day I’m writing this, one of my colleagues had someone stabbed in front of him in Piccadilly Gardens. It’s worth having some form of lifesaving bleeder kit on you, or in your car at the very least, because you never know when some youth with his trusty shank will decide to poke holes in his mate outside Morrisons.

Now the eagle eyed among you may notice that there’s no Peli Case in this photo. Well I don’t actually have it yet, and my poor old Plano box was looking too tired to come out of the garage, so come the weekend all this will be packed into the new case that I’m pretty certain I’ll be able to pack myself into as well. The other thing missing is the majority of my food, again, I don’t have it yet, but I’m sure you don’t need me to explain what food looks like. Even with those things missing though, I am amazed at how little living gear is actually needed. Sure there are things like lights and phone chargers, but for the most part they will be left in my car, and so don’t really warrant a place on my board. It is definitely refreshing to go from the kit checks of old where I would be packing full CBRN gear for a week of parachuting, to go to the absolute bare essentials and not even bringing a razor.

The Bergen is somewhat surplus for requirements this time. Whereas at the trees it feels more like classical woodblock living, and your Bergen is your best friend, for ATAR I am only taking it as an easy way to store my sleeping kit under my cot bed, and maybe as a seat if I feel like a sit down. Normally this would carry everything I need to live for the weekend, but for now the only other extra item is my North Face jacket, to be worn in the evening when the dossbag comes out.

Not really much to say on these, I’m sure everyone who has looked at my instagram feed more than once is sick of seeing them so I’ll keep it short. The pistol is coming only as a portaloo defence system. I fully expect it to get 1 shot off before dumping an entire mag of gas, and then I’ll be down to shitty baby wipes as my weapon of choice, but still, that 1 shot might be worth it.
The AK is a little more interesting, as mentioned before I’m bringing my tracer unit for the first time, and so I’m hoping to get some use out of it when the sun goes down. I’ve also opted to go for a simple push button setup for the Surefire. Again I don’t have NV, and as this is a FIBUA game it’s likely I’ll be in buildings at night so will need the constant-on function. For those out there that drop their fill every time someone uses a torch in the same grid square as their noodles, all I can say is it’s the risk you take. I’m not breaking my ankles on some stairs just because you spent more money than me. For those users who say “stop being poor and buy NV” I say stop being poor and buy an autogated setup. I am excited to try out the new Bearback Industries sling that Tim has very kindly gifted to me for review, it’s a lightweight alternative to the slingster and I’ll be interested to see how it stacks up against the Tacbelts UK equivalent.

My Expectations for the Game

Generally speaking I always try and stay positive when playing airsoft, and never more so than while at Stirling games, purely down to the increased cost and commitment of going to them. While I enjoy a moan as much as the next man, and while I’m sure there will be some minor bullshittery going on, I’m going into this weekend ready to have a cracking game at a training area I’ve not been to in years and fully prepared to laugh myself stupid when it starts snowing and I inevitably fall over. Last time out with Stirling I had a cracker of a weekend, and last time I was in Cellini it snowed; in April. As long as everyone just gets stuck in and has a good time then I can’t see why Op ATAR shouldn’t be a huge success.

Thanks for sitting through my wild ramblings, if you enjoyed it and want to see more stuff like this then drop me a comment on Instagram and I’ll do them more regularly. On a similar note, if you made it this far but thought it was a total waste of time, feel free to call me a cunt in the comments too. If you’re wondering where I get most of this stuff from, I’ll leave some links here: