I’ve been sitting on doing a review of these boots for several months now as I wanted to really get a feel for when they would wear out and have to be replaced, but with this week’s outbreak of hysteria and everyone being confined to the indoors I’m now faced with A) having a lot more time to write, and B) not going outside as often so likely won’t wear them out. So with that said this review is after nearly 3 months of owning the Alatamas, wearing them all day every day and walking approximately 2 miles per day. I umm’d and ahh’d about getting the Altama OTB’s for months, I always liked the look of them but could never really justify forking out for them while I was in the Army as my daily driver was a set of Aku’s, with my trusty Salomon speedcross 4’s in reserve. After getting out however, the need for a good pair of every day grey man trainers grew. Despite having friends who own several pairs, all of whom had nothing but good things to say about them, I once again shrugged off the Altamas and decided to stick with Salomon. While my Sense Rides were good, and a more covert style of walking/outdoor shoe, they didn’t do very well in the durability department, and after just a few months were really starting to look worn with portions of the mesh ripping and the soles wearing down very quickly. I went back to wearing a classic pair of Chucks, but Converse simply aren’t suited to wearing for long periods of time, provide little to no protection from the weather and have remarkably thin soles. So when Christmas 2019 came around and I had some extra pocket money to spend, I finally committed to the Altamas.

I’ve always been a big fan of Converse, and so the overall style of the OTB’s has always appealed to me. Being able to mix this design with the tactical world means that aesthetically the OTB’s are right up my street, none more so than in Multicam Black. As soon as I saw that Tactical Kit had them in stock I knew that they were the colour I wanted and quickly had a pair set aside. My only concern with them before ordering was the sizing, as the Americans are weird and size their shoes completely wrong. Luckily a handy way to tell what size you are is to look inside a pair of your old Converse, as they are largely the same fit. The only difference I found is that the Altamas are a tad more roomy width wise, and that getting the length right really matters (more on that later). As a general rule though these shoes are quite forgiving, and so if you do end up a half size too large you can always tighten them down and they don’t feel or look ridiculous. Getting the OTB’s on and off at first can be something of a chore, as the rubber insoles are basically cunts and so will grab onto anything that touches them, especially socks. Once they are on however they feel very stable on your foot, with a nice amount of padding in the sole and a very soft wrap-around feel for the body of the shoe. These are designed to be worn without socks, and having done so more than a few times they remain extremely comfortable, with the inside materials being kind to bare skin and so not causing any rubbing or blisters. While these are very flat soled shoes, there is plenty of depth to the padding so you don’t feel like you’re walking around with wooden planks under your feet.

So as I’m sure everyone is already aware of the various features and layout of the OTB’s, I’m going to cut straight to how I’ve found them.

In short, these shoes are fucking mega. They are incredibly comfy and aren’t overtly tactical enough to make you look like a total nonce on the train. Compared to the Salomons these replaced, they have held together incredibly well. I think this is probably due to the fact these are designed for repeatedly assaulting ships, and not gently strolling through Manchester, but even still it’s nice to know that buying these shoes won’t be a monthly occurrence for me. I have found one sign of damage though, although I think this is partly down to me buying half a size too large. One very big feature of the OTB’s is the cutout “hinge” at the toe joint that means the sole can move freely with your foot, but if you have a little extra room, this bend happens a little further down the shoe. I think this is why my sole has begun to separate from the body of the shoe. Luckily the stitching is still intact, and the separation can be fixed with some adhesive, but it’s one to be aware of – get your size right. 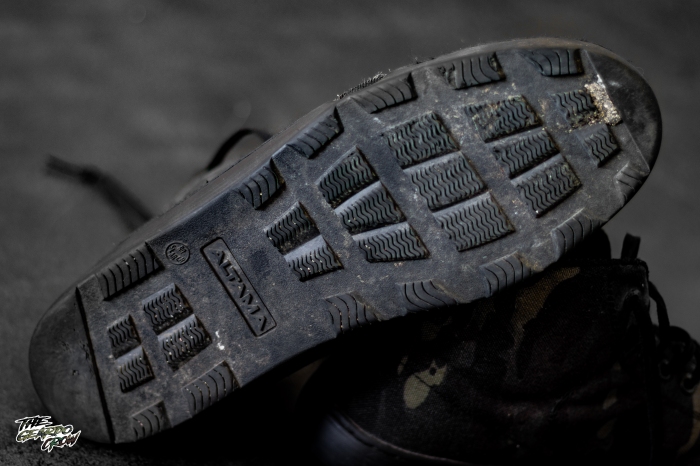 Aside from the small gap near the toes, the sole has held together very well. The tread isn’t exactly deep, but the make up of the rubber seems to be soft enough that the whole sole acts as a gripping surface, not unlike an F1 tire (RIP 2020 season). Again this is down to the fact the shoe is designed for wet metal surfaces, but it works very well on other normally slippy materials. Despite being soft, the sole is thick and so seems to be resistant enough to wear which means you aren’t going to burn through shoes at a rate of knots.

Something I definitely wanted from the Salomons was the speed lace design, as I’ll be honest I’m lazy and just like the simplicity of them. Unfortunately these aren’t on the Altamas, but the laces that are there are perfectly good. Something I do on all my shoes is to tie a knot in the end of each lace to ensure they don’t unlace themselves. This combined with the slick material of the lace means that I can just slip the shoes on, and pull the laces tight. They slip through the loops freely and create a nice even tension over your foot. When they eventually break I will replace them with some funky multicam arid shoesnakes, but for now they’re great.

Finally the large pull tab on the heel of the shoes makes it really easy to pull them on, but does tend to catch the hem of your trousers. Swings and roundabouts, it’s basically a non-issue.

What would I change?

So nothing’s perfect, and the OTB’s are no different. For how I use them, I have come across a couple of snags. The rubber insoles are designed to be worn without socks, and so when you wear them the two don’t really match. I’ve found that they have destroyed the balls and heels of several pairs of socks now and are showing no signs of slowing down. The insole also makes your feet stink. There’s no other way to say it, taking these off at the end of the day is another reason to keep your respirator when you leave the forces.

Luckily Altama have responded to the growing popularity of the OTB’s as everyday shoes and are bringing out “Urban Assault Shoes”. As soon as these land in the UK I’ll be getting some as they have swapped out the rubber insole and tailored them to be worn with socks. Something I’m definitely not keen on is the woven style of the patterns and so I will be getting them in a plain block colour, but other than this they should fix the issues I’ve found with the OTB’s.

Should you get some?

Yes. These are cool as shit, comfy, hard wearing and the fact you can rock about in tactical shoes without feeling like a total cunt is always a plus. IF there is ever a scenario where a boat needs boarding in the center of Manchester, and the only man for the job is a tubby, grumpy former infanteer with no experience of underways operations then I’m all set and good to go.

If you want to get these yourself then you can get them from Tactical Kit, available here. And if you wait a little while, the new urban assaults will be turning up soon I’m sure.

Thanks for having a read through, if you have any questions or just want to call me a dick then head over to @thegeardocrow and leave it there. Cheers!