This is one of those items I wanted for years, but could never justify owning. I’ve always liked the helmet pack/Yote style of daysack and started where many of us Brits tend to do; with a Warrior Ass Systems helmet pack. I didn’t have it long though, and got rid of it while in basic training, believing that as a Private soldier I’d never be allowed to use it, and for the first year at least I was right.

After a settling in period it became clear that I could in fact get away with a “jack sack”, but I had already invested in a myriad of other daysacks and simply couldn’t justify adding it to the list. Luckily I have a mate who did want one, and he bought the Platatac Bullock Echo Mk.3.

Having seen SH ripping about in it and giving it a good looking over I was convinced that I wanted one, but again, how to justify it? I was coming up to getting out and knew I had no use for a multicam daysack on the outside. Resigning to fate I’ve watched several of these come and go on the second hand groups and they were all multicam, not a bad guy colour in sight.

Then Plat did what Plat do best, release a limited run product with no warning at the end of the month and cause the kind of irresponsible panic buying not seen since the breakout of COVID-19. Or at least that’s how it feels to me.

The Bullock Echo is one of those items that is jam packed full of nice little features that you might not see from the outside, and are very thankful for when trying to pack your gear into what is a very small jack sack.

The first key feature that jumps out is obviously the helmet carrying area which is independently expandable from the main pack, meaning having the latter fully jam packed shouldn’t affect you getting your lid in and out. It’s worth noting that all Yote style packs are best used with smaller helmets like Opscores or Team Wendies, but you can get something like a Virtus bag of shite in there too, it just might be a little tight. 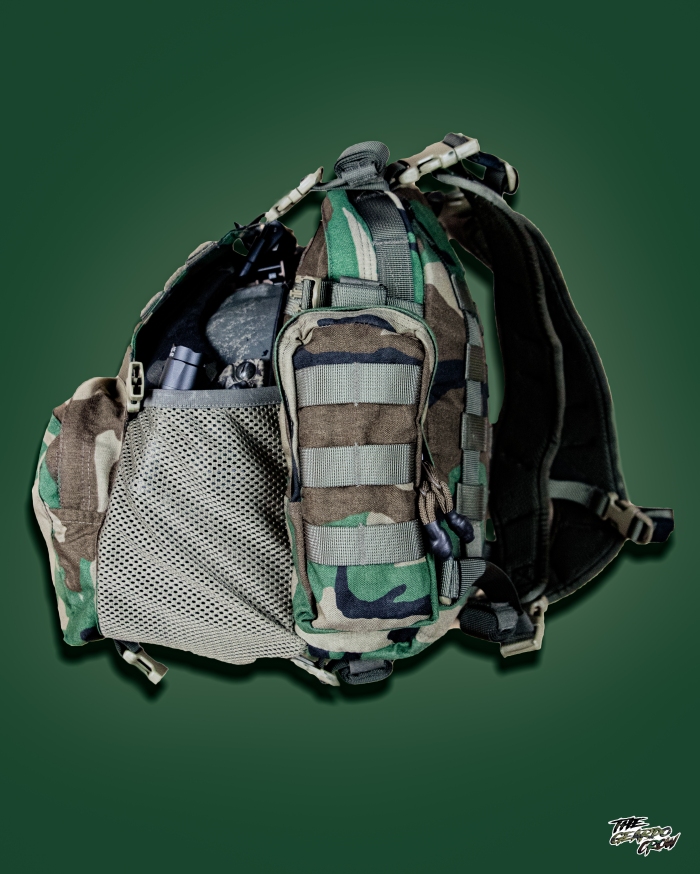 Inside the Bullock is storage galore. In the main compartment alone there are 2 large mesh zipped organiser pockets, a hydro sleeve and a removable mesh pocket for items that you may need to remove at speed if denying the pack, or simply need to keep important items like your rolling kit readily accessible at the top of your pack. 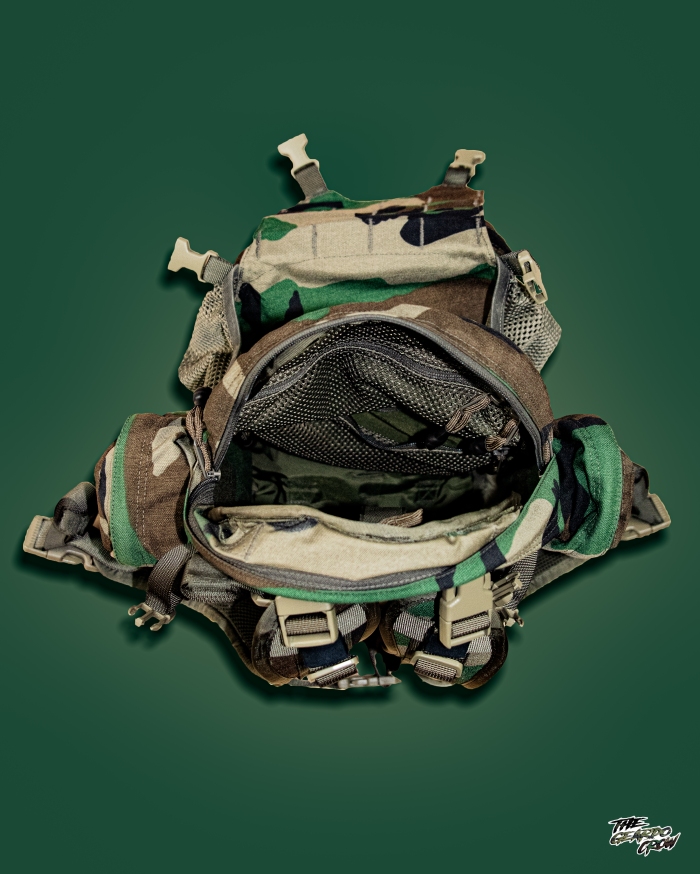 Outside the theme of pouches on pouches continues with two large side pockets, big enough for 3 AR magazines/a 354 battery each that have Molle on the front, and hidden sleeves behind for knives/radio handsets/yet more mags as the user sees fit. On the front the Bullock has yet another large pouch which can hold several 100rnd SAW nutsacks and Molle down the face of the main pack inside the helmet area. And just in case that wasn’t enough, the velcro field on the front flap also has Molle behind it, because why not? 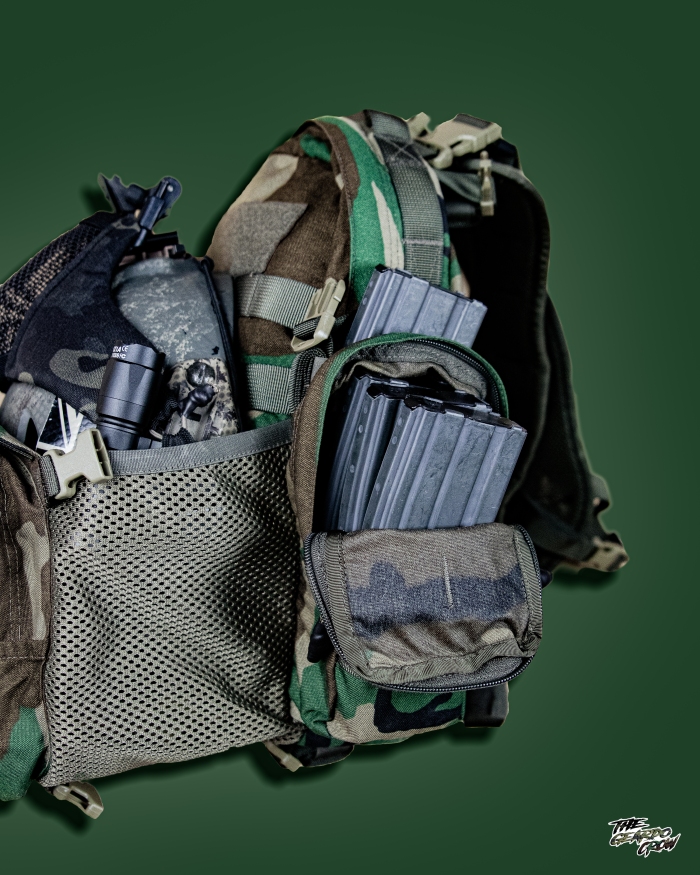 The way the Bullock attaches to you also has its own little surprises. You can choose either to Molle it to the back of your vest/rig, or use the included removable shoulder straps. Something which was definitely lacking from the WAS pack was any form of a drag/carry handle on the top of the bag. This is present on the Bullock, and is a nice slim folded bit of 1” webbing that runs down either side of the pack and is box stitched in place. While I wouldn’t want to be dragged by that, I can’t imagine it would fail on me.

The final features to note are the little ones. 90% of the straps on the Bullock come with velcro tabs to roll up excess webbing, helping those who don’t seem to mind danglies realise that they are wrong and need re-educating. There are also 2 comms/hydro ports in the side of the pack concealed under the drag handle.

Unfortunately thanks to bloody coronavirus I’ve only been able to use this over the span of several days at one event, and have had to settle for using it on my weekend walks since. In either case, the clear advantage that I draw from the Bullock is that it is very easy to organise your gear inside of it. Anyone who knows me will know that I’m anal abaout my kit and have spent hundreds of hours moving various setups about to try and make it as neat as possible, often resulting in me getting pissed off and selling the rig in question (*cough* AVS *cough*). Thanks to all the little independent pouches in the Bullock I can separate my kit out and keep away from the dreaded “just chuck it all in the main pocket” mentality.

I’ve also enjoyed using it because of its small size. It’s a true thoroughbred jack sack and probably isn’t one for brand new Privates being lumped with FIST, CWS, a spare 354 battery, lightweight stretcher, team med kit and a few hundred rounds of 7.62 link on top of their own gear. For commanders however this is the perfect way to carry your radio, a jacket and a bladder of water in a miniscule package. For airsoft, this is the perfect pack for me. Long gone are the days where I try and carry as much as possible, and this paired up with my Peacekeeper provides ample storage for the essentials.

Finally there’s something on the Bullock that I’ve not really seen from other daysacks in the past and I’m surprised more people don’t do it; flat shoulder straps. All my previous daysacks (Camelbak, Blackhawk, Jayjays, Mystery Ranch to name a few) have all gone for the super thick padding that adds bulk and always feels uncomfortable on body armour, despite being very comfortable on bare shoulders. The straps on the Bullock are the same as on their G2G pack, which I’ve owned for several months now.

These straps are very lightly padded inside thanks to the airmesh (something also not seen on a lot of packs) but are semi rigid overall. They have also been cut to a more ergonomic shape and are adjustable for ride height off the main pack itself. What this means is that you have a pair of firm straps that spread weight out across your chest and shoulders very well, are flatter than many others out there, and can be adjusted so that the “bend” in the strap sits in the right place even when wearing body armour. They are also totally removable should you prefer to Molle the pack on to your rig, or use some other straps that you prefer yourself.

Oh yeah, and I love it because it’s fucking Woodland.

Nothing’s perfect in my books, and the Bullock is no different, but it is up there at the top of the spectrum with the likes of Plat’s Badger Smock and Peacekeeper.

Personally I think that Molle’ing a pack onto your rig is a practice that died in the early 2000’s and I don’t know anyone that actually does it. In fact the majority of people I know with these helmet pack style daysacks have cut their Molle off altogether. The future is in hybrid packs that are attached to the back panel in a way that the wearer can unfasten it and swing it round to the front without having to take their rig off. This is something that SH did with his pack in the run up to our tour in Sudan, and while in the end it wasn’t necessary, the theory worked perfectly. I think if Plat could offer a retrofit kit that uses their shoulder strap attachment method then it would be a great way to make all of their packs compatible with most rigs.

The other thing I will be getting rid of in short order is the velcro tabs for securing webbing. While I think it’s excellent that they included it for the wrong’uns out there that dap about with straps all over the pace looking like the fucking Predator, I still prefer using tape of some sort. Velcro catches on clothing, skin and dirt, and never goes quite as tight as several years old sniper tape, but I guess that’s just my personal preference.

The biggest consideration to make when getting a Bullock is that you pretty much have a choice between having more than 1L of water in it and putting anything loose in the main pouch. This is a small pack that takes a deceiving amount of gear, not a medium or large pack. That being said, if you’re carrying your radio, wet/warm kit and spare ammo in your daysack, you’ve got your entire belt kit for water.

In short, I love the Bullock, and I think you will too. It’s one of those surprising bits of kit that just seems to handle what you throw at it. It’s very well made, very comfortable to wear and can easily be packed into the bottom of a Bergen for use on fast and light attacks. If you’re in the market for a jack sack then I don’t think you can go wrong with the Bullock, and for those who care there is a slightly modified version which is NSN’d and very much in use with the cool chaps in Hereford and Poole.

If you don’t think it’s big enough for you Plat do also offer an XL version, which I’m hoping to take a look at soon and see how it fares. Thanks for sitting through my review of the Platatac Bullock, it was a long one and you’ve done well to make it this far. If you’ve got any questions or abuse fire them over to my Instagram @thegeardocrow. Cheers!