Sit down and grab a brew for this one as there is a lot to go over.

Ever since I’ve started this blog I’ve been after interesting bits of kit that aren’t really seen too much online to try and keep it unique. This may be one of the most rare pieces I’ll ever get my hands on, and after a quick google search I’ve come to the conclusion that the one I’ve been loaned may very well be the only one in circulation. The history behind this rig is a bit sketchy, but what we can patch together is that it was issued as a trial piece to the boys down in Hereford at the time when the Scarab as we know it was in development, possibly before the Crye influx into UKSF. As a result of this it probably was never meant for open distribution, but after several attempts to contact Velocity Systems with no reply, it only seems right that it stays in public forum.

The overall design of the vest is similar in ways to the CP AVS that followed it. It features a harness of sorts with detachable platebags, scalable side armour options, interchangeable cummerbunds, removable front flaps and zip attachments for back panels. This design definitely required some refinement, and I can see why it never went mainstream in the current form as it is very complicated and I imagine not inexpensive to build. Having never owned a Scarab LT I don’t know exactly how many features made it through to the final model so I’ll be interested to have a look at the LT at some point in the future.

So let’s start with the “harness”. My understanding of the harness is that it was intended to carry different platebags set up for different missions. It is also the securing point for the two shoulder straps. The most interesting part of the harness is the excellent airflow technology on the inside. Not unlike systems seen on various daysacks, the Scarab Ptype has a frame with mesh panel that holds the carrier off the body with a gap of several centimetres. At first the frame can feel uncomfortable against the body, but it is not painful and over time it feels more and more normal leading to a well supported and comfortable vest that keeps you cool over long periods of use. After my recent 6 month stay in Africa, wearing the issued carrier without so much as a hint of airmesh on it, I can safely say that this feature on the Scarab would be a godsend for those running armour plates in dusty places. 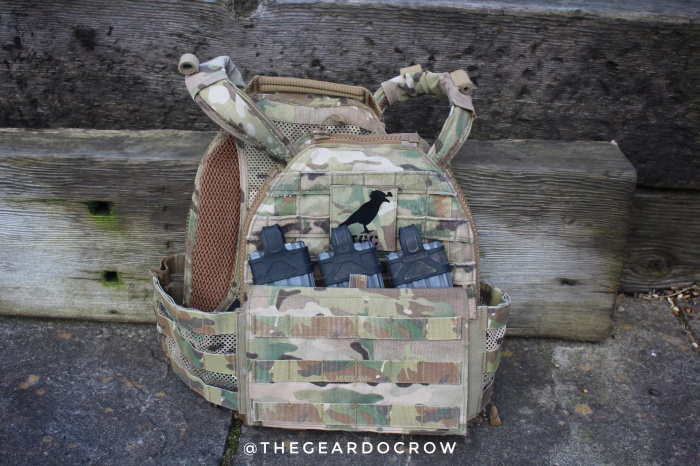 The platebags themselves are also highly complex. They attach to the harness via a combination of zips and rigid insert tabs to keep them secure. The front platebag features a large kangaroo pouch which can easily accommodate 5.56 and 7.62 magazines, and fits a wide range of inserts including the notoriously large S&S Precision kangaroo insert. The overall shape of the front platebag is noticeably different from the final product, and features colour matched loop velcro over all of its MOLLE webbing. Hidden behind the MOLLE fields are two vertical straps where QASM’s can be attached for running placards or chest rigs. Included with the rig is a MOLLE flap to be run over the front of the kangaroo pouch in order to secure the cummerbund and still be able to run smaller pouches on the front. On the edges of the front pouch are loops to attach the quarter flaps from Velsyst.

Keeping in trend with the rest of the cummerbund the quarter flaps have MOLLE on both the inside and out. They also feature velcro flaps to properly secure the cummerbund away from the front platebag, meaning you no longer need to use the attached front flap. The cummerbund itself is a 3 band skeletal design with mesh in between rows, and MOLLE inside and out. I personally am not a fan of the skeletal cummerbund design as it lacks structure, but the Crye 6×6 armour pouches will fit it and so can be applied as a retrofit. At the rear of the cummerbund the webbing breaks down into three elastic straps to provide improved comfort and mobility, and then is secured by velcro inside the rear platebag. This design confused me somewhat as there was little provision to attach the cummerbund to the harness as opposed to the platebag, meaning if you were to quickly change rear platebags you would also be changing cummerbunds. I’m sure Velocity Systems had their reasons for this, and given some more time they may have been more apparent. 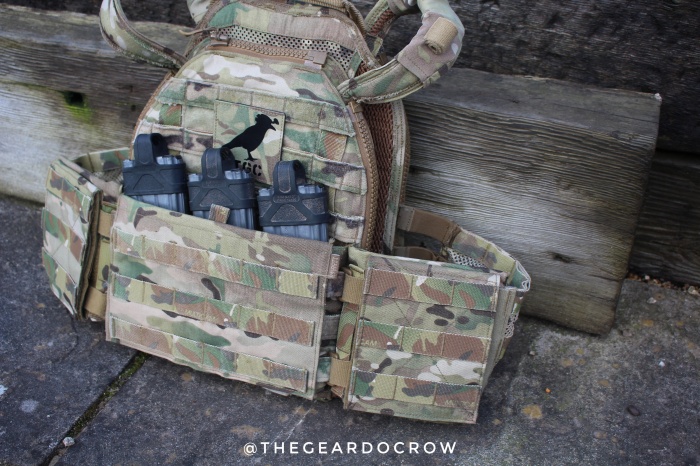 The rear platebag is also attached to the harness via 3 zips, but also features a second pair sewn right alongside for attaching back panels. These can be quite confusing as you can end up attaching these zips to the harness and having problems routing your cummerbund. Annoyingly the zips on the Scarab are longer than their Crye equivalent, meaning that most of the popular back panels will be too short to fit well onto the Velocity Systems vests. All this being said the back panel is fit for purpose, and features a very interesting system to secure the cummerbund inside the platebag itself, which actually makes for a very easy to adjust platform. Included with this package was the Velocity Systems zip on pack, which is identical to the Crye zip on pack in all respects apart from the length of the attachment zips. I do not know how long this design has been around so I can’t comment on who copied who, but my guess would be that the Crye came first. Regardless of who plagiarised who it is really nice to have this option for the VelSyst vests as it is one of the more useful options offered, and other brand packs may not be compatible with the Scarab. 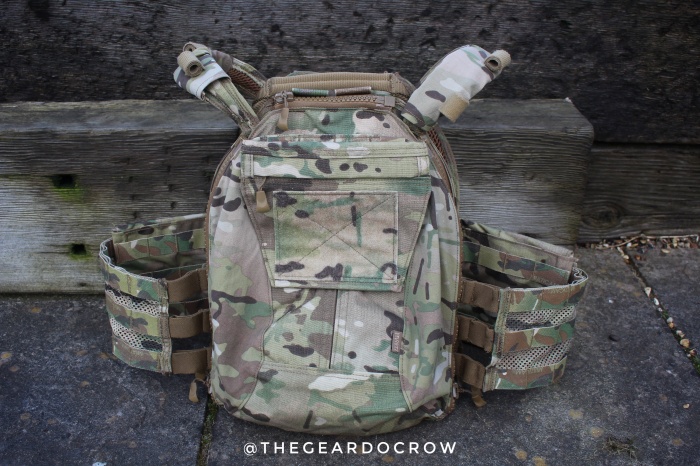 Overall I really like this vest, not just because it’s rare but because it has a lot of very well thought out features that with some time studying can be used to fully adjust this vest to your body. I would definitely add side armour pouches to the cummerbund to stiffen it as it lacks the rigidity to support heavy items. The owner of this vest has chosen to switch to a Crye AVS cummerbund for this reason. Other than that though with the options available it can be used to great effect, and I’m very excited to get my hands on a Scarab LT to do a side-by-side comparison and see what design features were carried through.

Hopefully this review hasn’t gotten someone in trouble for releasing this vest into the public market, but for me it was just too nice of a piece to keep squirrelled away. Thanks for sticking around to give it a read and thanks to DC for lending me the vest to have a look at. If you have any questions regarding this review feel free to get hold of me here on the blog or on my Instagram page @thegeardocrow.